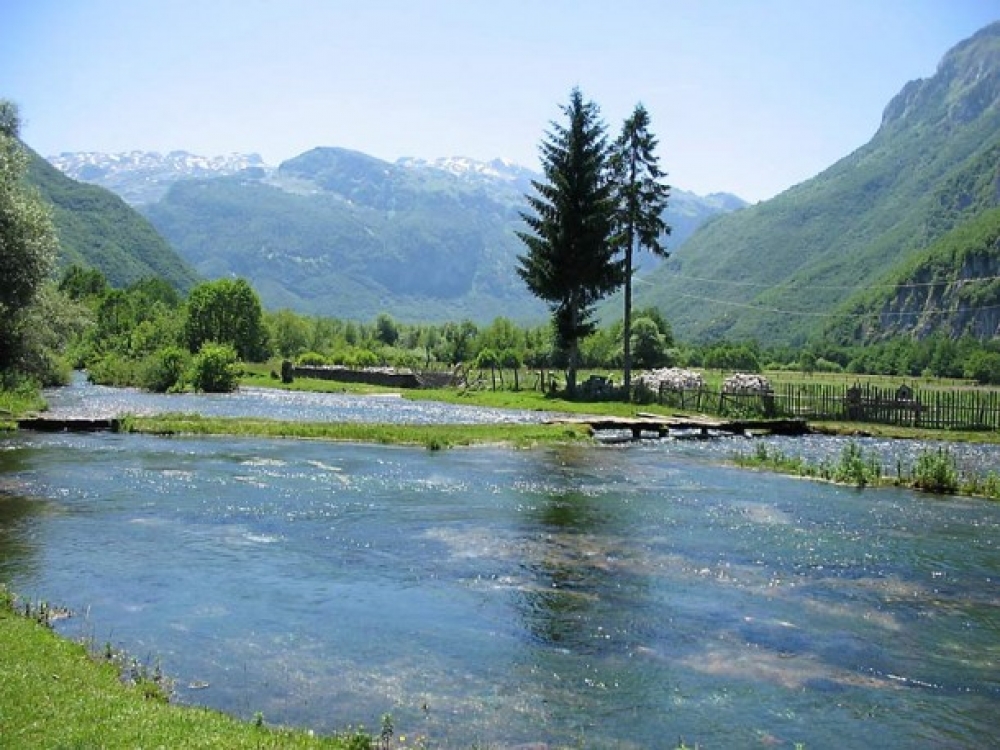 The Prokletije region was proclaimed a national park in 2009. It covers an area of 16630 hectares. The park is located in the border region between Montenegro and Albania, between the Podgorica -Skadar basin to the southeast and Metohija to the northeast. The main characteristics of this region are its relief and the abundance of water. There are two nature reserves on the territory of park, Lake Hrid and Volusnica.

Hridsko lake is on a northwest side of Prokletije, in municipality of Plav, on north of Montenegro. Lake can be reached from the side of Plav, app 18km away from it. It is located between peaks Mali and Veliki Hrid, and below the peak Hridski krs. It is 300 meters long and 160 meters wide. In summer it is 5 meters deep, and during other seasons significantly more because of rain and snow.

It is one of the highest altitude lakes in Montenegro, called “Gorske oci”. Lake is of glacial foundation and it is known as a “Pearl of Prokletije” among people.

There is a legend about forest fairies that are hiding from humans and bathing in Hridsko lake. Even nowadays, those who decide to go for a swim in the lake believe that swimming in this lake brings health and luck in marriage. Lake is situated on the international hiking trail Peaks of the Balkans, which is 192 kilometers long and passing through Montenegro, Kosovo and Albania. Not too far from the lake is a ‘triple border’ peak Tromedja, where borders of all three countries connect in the same spot, which is very interesting to hikers. The lake nestles at the foot of the towering Prokletije mountain range, and like most lakes in Montenegro, it is a glacial lake, formed as the last ice age ended, roughly 10,000 years ago. It is surrounded by green rocky hills that lead up to the towering peaks behind them.

Ropojana valley is diffinetely one of the most beautiful sights in Prokletije region. The hike through the valley will take into other dimension, somewhere where you feel like the time stoped and where the fragnances surround you so deeply that you can almost touch them. Grlja waterfall and spring Sava's eye or The eye of Skakavica river are the highlights of the short hike. Sava’s Eye is a large spring whose waters come from an aquifer almost a mile under the ground, and its diameter is around 30 meters. The water from this spring flows some 2.5km until it comes to an obstacle which it surpasses as a waterfall. This waterfall is also fed with Bjelicki stream. After Waterfall it becomes Grlja river which flows in the narow partly underground canyon. When it gets off the canyon it meanders a lot and finaly it merges with the water from Alipasa's springs and gets its new name - Vruja. Grebaja is famous after its very flat base where four bigger meadows dominate, cut by the Valušnički brook which is dry during summer. From Valušnički brook, Grebaja valley is 2 km long. The meadow across the brook represents the beginning of Grebaja and is called Krug (Circle) or Stari katun (Old shepherd's hut).  Down there beside the road, in the little part of the conifer forest, there is Suljova česma (Suljo's fountain) - the very last and the only drinking water in Grebaja Valley.  Suljo's fountain is the starting point for many mountaineers' tours Grebaja Valley and its an ideal place for camping. This is the oldest and probably most interesting residental and defensive building in Plav city. It was built by a Hasan-beg Redzepagic in 1671.year. The tower has 3 floors connected by inside wooden steps. 2 floors are made of stone and third is made of wood. Ground floor was used as stockroom and stables for horses, and on other floors there were rooms for sleeping, eating, living rooms etc... Walls of the tower are even ticker that 1 meter! This tower is now used as the etnographic museum. Learn about Montenegro from your home

Taking into consideration the situation with COVID 19, NTO of Montenegro prepared online tours for sightseeing in our country. You can enjoy in Montenegro through different virtual tours.

The highest peak is Crna Glava of 2,139 meters high, then Crni vrh, Zekova glava and the peak of  Ključ. Bjelasica leans equally on the picturesque mountain chains of Komovi on the southern slopes of the mountain.

The National Park Biogradska Gora has a special place in the impressive mosaic of natural beauties in Montenegro. This is one of the oldest protected areas in the world with 5.65 hectares spreading over the central part of the Bjelasica mountain rang

We will be present as a visitors during Utazas Travel fair in Budapest held from 21st till 24th of February.

The Prokletije region was proclaimed a national park in 2009. It covers an area of 16630 hectares. The park is located in the border region between Montenegro and Albania, between the Podgorica -Skadar basin to the southeast and Metohija to the north